The spring 2014 issue of Bicycle Quarterly features an article on creating schedules for long, timed rides. I must admit, this is not something I have done much—my approach to riding brevets has been to just do it, and if it takes me more than the time limit: whatevs. Schedules and goals sound too much like work and not fun. Yesterday, however, I found a new trail that I'd like to add to my collection and that because of its location will require me to do some more careful scheduling ahead of the ride.

Via someone's Twitter update I discovered the Corridor Aerobique, a new-to-me bike trail in the Lower Laurentians. It is 57 kilometers, connecting Morin Heights to Amherst mostly on a gravel surface away from car traffic, and soon the Corridor will be connected to the P'tit Train du Nord. Since I loved all of my previous rides through the Laurentians I really want to try this one, too. But Amherst's location at the end of the trail could be aptly described as "in the middle of nowhere," so how would I get back home? 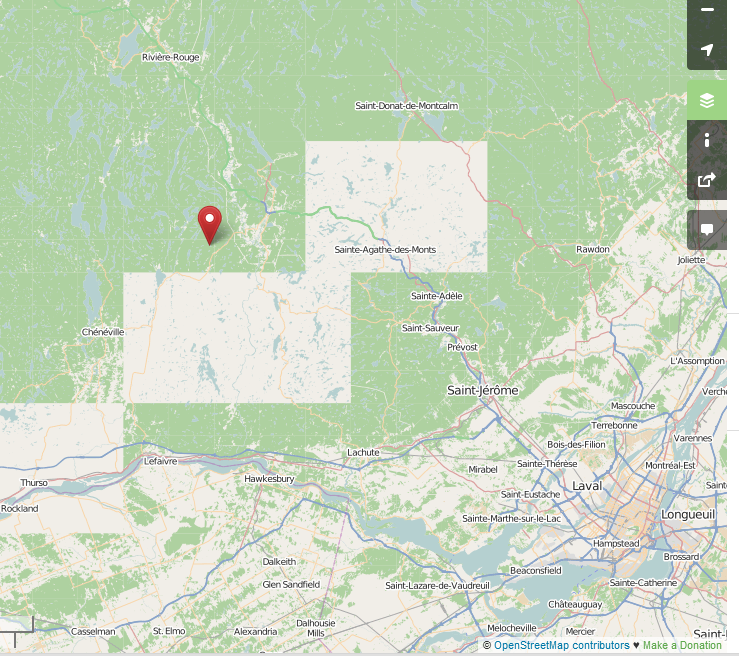 To get a sense of the distances, I used GPSies to map a route starting at the de la Concorde metro  in Laval, then taking the P'tit train du Nord to Saint-Sauveur, the Corridor to Amhert, and then heading south towards the Ottawa River and following the Route Verte through Oka back to the Deux-Montagnes commuter rail station.

Unfortunately, that is be a total distance of 285 kilometers—doable on my road bike, but probably not so much on my Cross-Check, which is all I have access to at the moment. My average speed on the CC tends to be about three kilometers per hour less than on the Gunnar, meaning that I'd have to spend about two additional hours in the saddle. In addition, I would have to time the start of the ride in a way that would get me back to Deux-Montagnes at a time when the trains are actually running and accept bikes on board.

Some 35 kilometers at the beginning of the ride could be shaved off by taking the train to Saint-Jérôme. But that further exacerbates the timing problems. The first weekday train to Saint-Jérôme would get me there at 8:20, leaving me with 14 hours and 40 minutes until the last Deux-Montagnes departure at 23:00, or an overall average of close to 18 km/h. With time off the bike limited to 3 hours I'd need a moving average of about 22.3 km/h; or 20.5 km/h with two hours off the bike. To assess how realistic those speeds are one would have to compare to data from other rides of similar distance, something which is mostly missing in this case, as usually I ride Gunnar on longer rides. From the data I have I would conclude that the plan is ambitious but probably doable.

So let's make a schedule roughly following the BQ method. Since this is not a brevet I had to come up with my own intermediate points, basing them on the elevation profile, the location of villages and towns, or major changes in direction. When entering the data into the spreadsheet it became clear the that plan with 3 hours off the bike probably was not going to work out, as it required moving averages too high on several sections. With the two-hour plan, however, things look more promising:

Unless I encounter major problems like detours, mechanical issues, or adverse weather, I think I can do this. Assuming the weather forecast doesn't change and I get through enough work over the weekend I might try it on Monday. To be continued.

Written by Hobbes vs Boyle at 8:50 AM