My last brevet was in 2013, back when I still lived in Montreal. One major advantage of the brevets in Montreal was that they started within riding distance from my home. Not so much in Madison, where the choice was to either ride with the Driftless Randonneurs out of Richland Center—a 60-mile drive—or with the Great Lakes Randonneurs out of Delavan—also 60 miles from Madison. So while over the years of living here I had been interested in doing brevets again, in the end it never happened. Too much hassle for someone living without a car.

Things changed this month. Two weekends ago, a friend and I rode to Milwaukee, starting at 3 in the morning. I thoroughly enjoyed that 145 km (90 mi) ride. And so when my friend Andy asked on FB whether anybody was interested in a 200 km or 300 km brevet with the Driftless Randos, I was all ears.

Kevin was in as well, and he offered to give me a ride. We drove toward Richland Center on Friday evening after work. Andy met up with us for dinner in Spring Green at Freddy Valentine's, a lovely pub in a historic bank building. Andy spent the night in his Bike Mobile van, and Kevin and I stayed at the Ramada White House Inn. Yes, it's themed after that White House, meaning it has cheesy portraits of various US presidents inside, a half-collapsed awning pretending to be a prostyle portico, and a giant US flag flying in front of it. At the front desk we were warned that a high school class was staying near our room and if they were too noisy, we should just call... Well, the beds were comfortable and the students were quiet. At 6 am we were ready to roll. 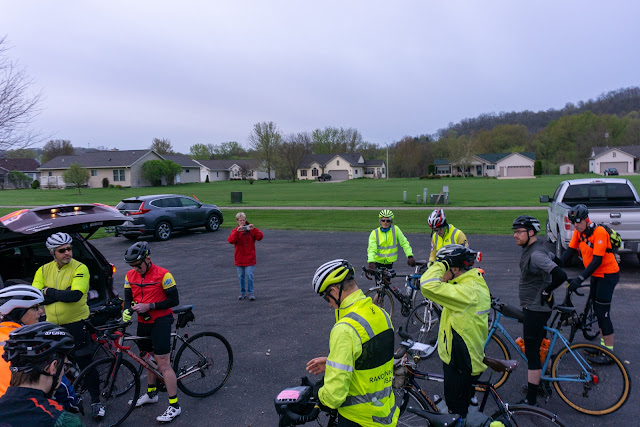 Our group was about 15 riders strong. The 200, 300, and 400 kilometer routes shared the same course until after the first control. The whole group stayed together in a fast paceline, and it only took us 1 hour 18 minutes for the 23 miles to the control in Spring Green. Kevin and I got back on the road quickly, but not before 4 or 5 other riders had already left.

We did catch up to one rider, and we stayed with him until the 300 km or 400 km course that he was on took him in a different direction. From the Wisconsin River in Spring Green, the three of us had the first of four big climbs ahead of us. The grade was subdued, rarely requiring us to get out of the saddle or even getting into the small chain ring. So far this season I had done few rides with significant climbing, and so I was committed to taking it slow on the hills. Kevin, who has ridden way more than usual this year, also took it easy on the climbs. Partly because of some back issues; partly because his drivetrain made it difficult to get onto the largest cog.

The next control came soon. The Hyde Store—which in typical Wisconsin fashion isn't a store but a tavern—was deserted at this time of day. We walked around the building, just to be sure we weren't missing anything, but eventually we decided to just note the time in our control cards and take a selfie as proof of passage.


The route now took us toward Governor Dodge State Park, and I started recognizing some of the roads from previous rides. Two more climbs were between the Hyde Store and the next control in Highland, which would also be the half-way point of the ride. Kevin and I stayed together, but he was clearly the stronger ride and I sat on his wheel for significant amounts of time. I started to fade a little and was excited at the prospect of a slightly longer break in Highland.

The BP gas station in Highland was hopping when we arrived. We were confused by our brevet cards, which indicated that this was an info control—but didn't provide us with a question to answer! I bought two small bottles of V8, a pickle in a bag, and a gallon of water to share. On the bench outside I had one of the peanut-butter-tofu-and-kimchi sandwiches I brought (I couldn't really argue with Kevin's assessment, “That's weird”). After a couple minutes, three other riders including Andy arrived as well. Sitting down and having food helped me feel refreshed. But I was also still a little chilly, as the day had warmed up less than forecast. In retrospect I probably should have had a Pepsi or some other sugary thing, but I wanted to save that boost for later in the ride and I was also counting on the route being downhill to the next control.

All five us rolled out of Highland together, but we were separated quickly. Because the bathroom line at the BP had been long, me and Gabe had to take a quick stop on the side of the road. Whereas Gabe on his fancy Pinarello was able to catch up with Kevin and Andy, I gave up the chase quickly and rode at my own pace. Which wasn't particularly fast. Highway Q followed the wide Blue River valley toward the Wisconsin River. The highlight of this section was spotting a bald eagle on a tree; the low was being chased by a St Bernard.

As I got to the gas station control in Muscoda, I knew it was high time for sugar and caffeine in form of a Pepsi. All five of us headed out together again, with the next control being only a few kilometers downriver. On the dead straight highway 133 we were battling a stiff headwind at this point, and I think we were all very glad that Gabe took a strong pull all the way form Muscoda to Blue River. Here it was time to cross to the northern shore of the Wisconsin River again, with a quick control stop at a gas station. The Pepsi had done its job at this point and I felt much better. So much so that heading out of the gas station I unintentionally rode away from the group for a little bit. After going east on Highway 60 for a little bit, we turned north onto Highway E. The highway follows the valley of Mill Creek, and for the first time of the day we were able to catch a tailwind. Kevin, Andy, and I rode together, making good time. The valley very gently climbs for almost 20 miles.

Only once we turned onto Patch Hill Drive did the grade pick up. I shifted to the small ring and took it slow. I could definitely feel the kilometers in my legs and I didn't want to blow up in the last stretch of the ride. Ultimately, the climb was pretty short and I arrived at the info control on top of it not much after Kevin and Andy (who was slowed down by having to answer a bike shop call as he was climbing...). And not much after, the two other riders arrived on top as well. After we had counted the number of zip ties on the street sign, we departed for the final leg of our journey. The climbing was done for the day, but now we were riding into the wind again. With the final destination close, the group fell apart. Kevin and Gabe pushed ahead, followed by Andy; I was slowly falling back, and somewhere behind me was Bill.

Not far from Richland Center, the Man with the Hammer came for me and made me pay for not eating enough. I snarfed down some more peanut butter pretzels and just made peace with the fact that the remaining few kilometers would be slow. A quick bathroom stop and eagle selfie on the outskirts of Richland Center helped me regain my composure and after 9.5 hours I arrived back at the White House. I was very happy with my time. The route had been great and the cue sheet accurate.

Even though it had been a hard effort for me (and I was really thankful for Kevin and the others whose wheel I could sit on), the next day I could hardly wait to get back on the bike again and ended up riding 50 kilometers (30 miles). I still very much enjoy riding brevets, but the complicated logistics probably mean that I won't do them all that often. I know that there are some permanent routes starting out of Madison, and maybe we can organize a little event around here to do them in a larger group.

Written by Hobbes vs Boyle at 6:57 PM