Over the course of the year, the Biketopus and I had loosely talked about doing a long bike tour this summer. The Biketopus will start a busy new job next year and so we wanted to take the opportunity to be on the road for more than just a few days. We discussed various options -- taking the bikes on our France work/vacation trip, touring in my native Germany, or maybe going out to the US West Coast. In the end, we decided to stay close to home: start in Montreal and go east for about two weeks, taking the Route Verte 1 to Quebec City, continuing along the Saint Lawrence, and then cutting across the Gaspesie peninsula. Unfortunately, we had a family emergency just before the planned start of the tour and therefore had to modify our plans. The trip was trimmed down to one week and about 600km of riding in a loop from Montreal.

I planned the route using my local knowledge of the region, gained on my long solo rides and brevets, the Route Verte guidebook, and the Strava global heatmap. I knew that 600km in one week would be pushing it, especially if you keep in mind that as a rule of thumb you have to add about 10% distance in order to get a realistic estimate. But since the last part of the ride would be in well-known territory I knew that I could always come up with a shortcut if necessary.

Preparation for the ride was a bit hectic. As per usual, Wolfgang, my trusty Surly Cross-Check, would be carrying most of the gear, and as I had recently switched out the fork to a disc-brake compatible one, I had to install a new front rack, a Tubus Tara. Other than that and switching one of Wolfgang's badly worn tires, both our bikes were in pretty good shape. The night before our departure, we finished packing all our gear, and on Friday morning it was time to load up. Wolfgang was burdened with two Ortlieb Front Rollers, my recently acquired Back Roller Pluses, the REI Half Dome Plus tent, and a little army surplus handlebar bag. All together, bike and gear weighed in at about 39kg, if our luggage scale is to be trusted. Madge, the Biketopus's Fuji Touring, had one rear pannier and the classic Thermarest on the rack.

All the preparation paid off, and on Friday morning, at 9:30 we left home -- even half an hour earlier than planned! Originally, the first stage of the ride would have led us almost to Granby, but since one of the campgrounds there was full and the other one didn't have potable water(?!), we aimed for a campground near Ange-Gardien.

At the request of the Biketopus, we left the island of Montreal via the Champlain Bridge Ice Control Structure (Estacade) and were then planning to get to the South Shore at the Saint-Lambert locks. Unfortunately, a big ship was just about to enter the locks, which would have meant at least a 30 minute delay. Instead, we decided to detour via the Jacques Cartier Bridge, adding a few kilometers and, more importantly, the first steep climb of our trip. Pushing Wolfgang up that incline was a sharp reminder that I was no longer riding my 11-34 MTB cassette like on the last tour, but merely a 13-26. Oh well, too late.

On the South Shore, we took our first little break on the Route Verte 1, which we would follow for the next 30km into Chambly -- a familiar route to both of us.

The weather was glorious: a little humid, but clear blue skies, pleasant temperatures and nice tailwind.

We got into the pretty town of Chambly just in time for lunch. Usually I ride through Chambly only on the weekends, when it is full of cyclists and other tourists; today, however, the many cafés and restaurants weren't very busy. We ate at Marius, which was maybe a little overpriced, but offered a terrace with a great view of Lac Chambly. 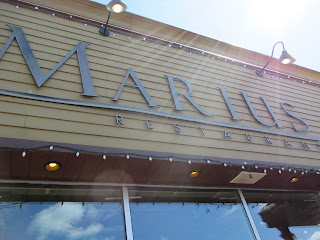 Before we got going again, I had to re-tighten Madge's handlebars. Unfortunately, somewhere in the process of packing up again, I left behind both my bike gloves and the padlock for our bikes -- something I realized only many kilometers further along.

After passing the first set of locks on the Chambly Canal, we left the Route Verte, crossed the Richelieu River and got onto the Route des Champs. This involves some confusing zig-zagging in the towns of Richelieu and Marieville, but also a newly paved stretch of road with wide bike lanes. The first half of the Route des Champs is on well-maintained gravel. As the name of the route implies, it leads mostly through fields and isn't particularly exciting.
In Saint-Cesaire, we stopped to get dinner ingredients and a new padlock. I made some fun of the biketopus of managing to spend 40 dollars at the supermarket, but I guess that's what happens if you go grocery shopping while hungry. To get to the campground, we had to leave the Route des Champs just after Saint-Cesaire, first on a nice country road, then for a short stretch on a busy highway with a narrow shoulder, and then again on a nice country road out of the village of Ange-Gardien.

The final stretch of the ride dragged on a little longer than expected and we re-checked Google Maps to make sure we were on the right track. Indeed, we were, and after the next turn Camping Mon Repos appeared. We were happy to see that their sign included a cyclist: 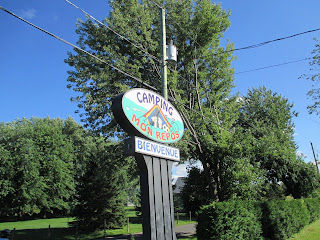 The campground itself was probably the largest one I've ever been to (not that that means much), and on first sight its primary audience were clearly not cyclists but seasonal campers with RVs and trailers.

To get to our campsite, we had to ride over a kilometer to the outer edge of the campground. Once we got, there, however, we were pleasantly surprised: a huge grassy spot with fire pits and picnic tables, surrounded by trees. There was enough space for at least eight tents, but we had it all to ourselves! 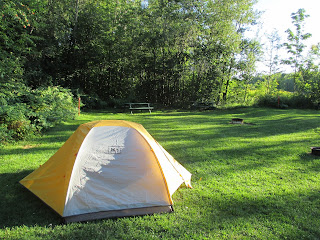 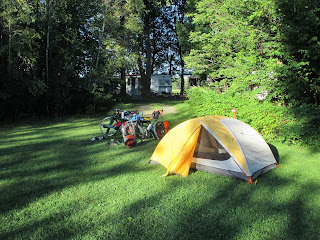 Somewhat less pleasant was the fact that one had to pay for hot water in the showers. Not so much a problem for me, as I always shower cold anyway, but the Biketopus instead chose to just go for a swim in one of the three pools. After a big dinner and a couple of beers, we crawled into our sleeping bags and dozed off.

Written by Hobbes vs Boyle at 3:03 PM