The night in the tent was quite a bit warmer than the previous one. We had closed both sides of the rain fly, which probably was a good idea not just for temperature regulation but also for keeping wildlife in check. Campground staff had warned us about a raccoon problem and we had spotted a couple of them before going to bed. Our neighbor, who slept in a hammock, told us in the morning that the 'coons had kept him awake for a good while when they were fighting over a plastic bag and ran around his bike and hammock. We hadn't heard any of this, me because of my preventative use of ear plugs, the biketopus because of her ability to sleep through that kind of stuff after a long day on the bike.

After my nice evening swim, I definitely wanted to make sure that the biketopus would get to see the lovely lake as well, and so after packing up we headed down to the lake instead of back up to the Route Verte. It was still very empty and quiet at the beach, but we knew that there was a long day ahead of us and we got going again. According to the map, the main park road woul
d intersect with the Route Verte after a few kilometers and so we decided to spare ourselves the potential up and down of the trail. The park road was very quiet still and the scenery was really lovely.

Our destination for the day was Lennoxville, a small town just outside Sherbrooke, where we had booked a motel for the night. Sherbrooke is quite a bit lower than the Mont Orford Park, but this by no means meant that it'd be a nice downhill all day. The climbing started as soon as we got on the Route Verte at the Étang aux cerises, another beautiful lake in the National Park. 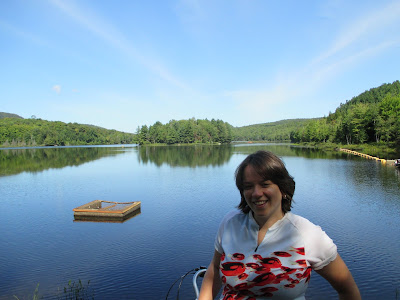 Through the dense forest of the National Park the Route Verte meandered up and down. The climbs weren't long, but some of them were steep enough to force me off the bike for the first time on this trip.
Once we had exited the park, we got a short reprieve from the up and down. First on a gravel trail, then on a stunning dirt road, we zoomed downhill to the small town of Orford. 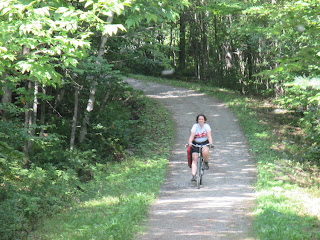 We had a second breakfast at the local grocery/prepared foods store. The following 10 kilometers would have made a great exhibit for a bike-infrastructure-planned-by-non-cyclists blackbook. The route awkwardly looped around Orford, and while doing do continued to include every little climb possible. More than once did we fantasize about putting one of the Route Verte planners on a fully loaded touring bike and making them ride the route 5 times in a row...
Fortunately, the great weather and scenic landscape mostly made up for the planning SNAFUs and after not too long we reached Lac Memphremagog and the town of Magog on its nothern tip.
It was time to have lunch again, and we were happy to spot a "Marche Vegetarien" right next to the lake promenade. It was a little suspicious that a vegetarian market would include a butcher's and a fish shop, but hey, they did have a good selection of tasty veggie foods. 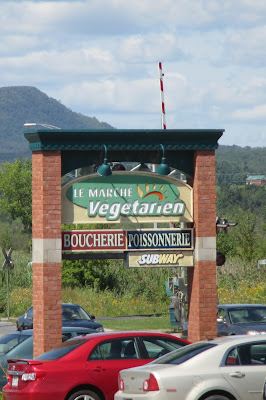 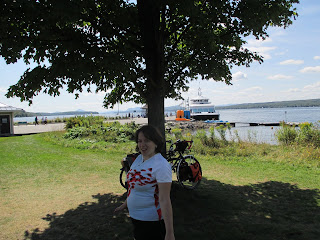 Our lunch spot was a picnic table overlooking the lake that stretches all the way into northern Vermont. 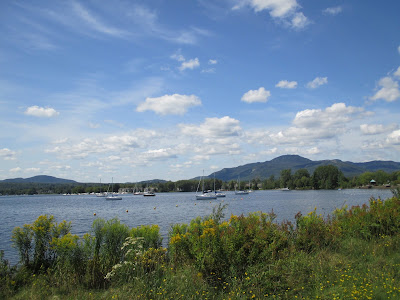 The route out of Magog was mostly unremarkable. A little bit of gratuitous up and down, some riding through industrial areas, and then long, straight gravel trails through the forest. After passing Lac Magog, much smaller than Lac Memphremagog, the bike route forks: The official Route Verte crosses the Magog River and leads south to Lac Massawippi before entering Sherbrooke from the southeast; the other route follows the Magog river northeast into Sherbrooke. After the previous days' experience with the Route Verte, we suspected that the former option would not only be farther, but might also include who-know-how-many hills. Therefore, we decided to take the easier option this time and save the Route Verte for tomorrow. 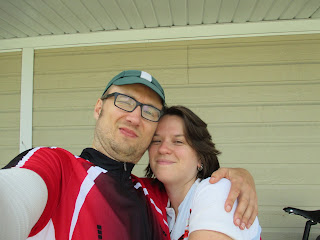 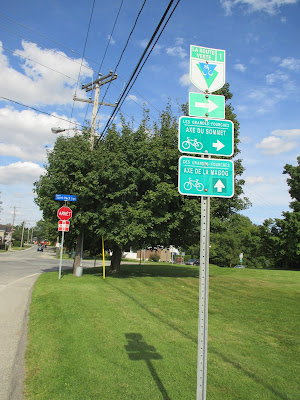 The ride into Sherbrooke was mostly uneventful and because of the proximity of the river very pretty. A friend of ours who spent a lot of time in Sherbrooke for work had warned us that the city itself was rather boring. The view from the cycling path, however, made it seem pretty nice, though. Sherbrooke is located at the confluence of the Magog and the Saint-François rivers, and this is also where the Axe de la Magog and the Route Verte meet together again. To get to our destination, we followed the Route Verte and the Saint-François southeast for about ten kilometers until we reached the campus of Bishop's University.
Bishop's is one of the three primarily English language universities in Quebec and the only one outside of Montreal. Consequently, Lennoxville had a pretty anglo feel to it. At our hotel, La Paysanne, most of the cars had Ontario license plates -- parents dropping off their children for the new school year. After having made ourselves a little more presentable and me going on a short reconnaissance ride to make sure they were open, we walked into the town center to what is the oldest brewpub in Quebec, the Lion d'Or / Golden Lion. On their lovely patio we enjoyed some beers before getting some grocery store foods for me and a gigantic poutine for the biketopus, to be eaten in our comfortable bed. 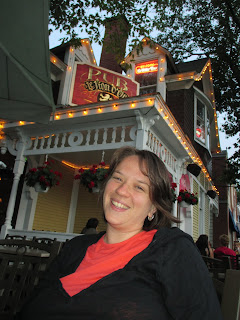