I picked up my new tires last Tuesday and already put almost 200 km on them. Tueoo early for a comprehensive review, but not too early for some first impressions.

Dishonesty in tire sizing is a well-known phenomenon in the bike world. In order to be able their tires as especially light-weight manufacturers make them narrower than their designation implies, so your 700x28 c tire might be only 26 mm wide.1 This is definitely true for the Randonneurs. Their measured width on a 19.6 mm Mavic Open Pro rim  is only about 32 mm. 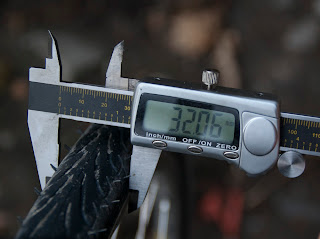 The tires' weight as measured on my kitchen scale is fortunately closer to the manufacturer's claim: 472 g vs. 460 g advertised.

The rubber is definitely softer than my Michelin Krylions and also a bit softer than my Continental Gatorskins. Tread is rather minimal, as you can see in the picture.

The Randonneur Pro is a folding tire and was reasonable easy to mount. Folding tires tend to be a bit more difficult to mount than wire bead tires because they don't stay in place by themselves. The trick thus is to fix them on the rim in one spot with a zip tie. From there I could easily mount them with two tire levers.

I took the tires on a 130 km ride, mostly on the typical wintry salt-water-grime pavement, but also several miles of partly snowy, partly muddy gravel roads. For pressure I followed the Bicycling Quarterly guidelines, i.e. 60 psi in the front and 70 psi in the back. The tires had a surprising amount of traction and the ride quality was nice. The rolling resistance is hard to assess: The moving average on this ride was only 19 km/h, which is fairly slow for me. But if that's due to the tires is unclear. The dirt roads, the hills and my general lack of energy on that day probably contributed more than the tires. But I will keep an eye olin that.

So far I'm happy with the tires. I'm annoyed that they are narrower than advertised but since I'm riding mostly on snow-free asphalt roads it probably doesn't matter too much. The main question is how puncture proof the tires will be. Updated will follow.

1 The whole issue gets complicated because of the various tire sizing systems. I have a rough understanding of how they work, but I, for example, still don't understand why 622-35 is the same size as 700x37C, and I have no idea if said tires are 35 or 37 mm wide.
Written by Hobbes vs Boyle at 2:01 PM