Coffeeneuring and a Fall S24O, two-in-one

Despite my deep immersion in all things bike and my love of coffee, somehow I never picked up on the coffeeneuring phenomenon. Yeah, I had seen the occasional hash tag, but only this year did I realize that there is more to it than just getting on your bike and having coffee somewhere. You can read all about the origin and rules of this "utility cycling challenge" on the Chasing Mailboxes blog. In any case, this year I'm participating.

After a false start over the previous weekend—I had assumed the challenge started on October 1—I got my first two rides in last Saturday and Sunday. Even better, we combined coffeeneuring with a fall sub-24-hour overnight camping trip, the first one since my crash in July. Living in Madison puts you in the fortunate position to pick from four different destinations for an S24O that are all close enough to not be too challenging, despite me still recovering from my injury. This year we had already done two trips to the west (Blue Mound State Park and Brigham County Park) and one trip to Sand Hill Station in the east. So this time we opted for New Glarus Woods State Park, about 40 kilometers (25 miles) south of Madison.


Both the SO and I still had some work to do on Saturday morning, giving me an opportunity for a quick coffeeneuring ride to one my favorite Madison coffee shops, Crescendo. It is less than a mile from our home to the shop, and so after enjoying a nice Rwanda pour-over, I had to do some detouring to get the trip distance over the required two miles. 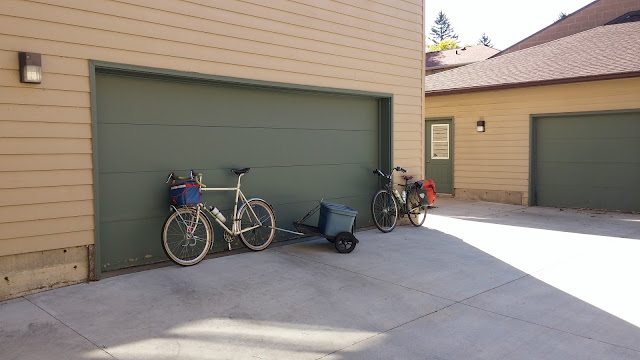 After lunch I crammed all our camping gear into a plastic tote strapped on a trailer and hitched to my SOMA Grand Randonneur, and off to New Glarus we were. The great thing about the route is that is almost exclusively on trails. First on pavement, where lots of people were out on their bikes, absorbing the October sun. Once the Badger State Trail turns to packed gravel, bike traffic diminished quickly. The trail was quite overgrown with grass, turning it into double-track, probably due to the above average rainfall over the past weeks. While the bike was in the track, the trailer would roll over grass, providing me with an extra workout. 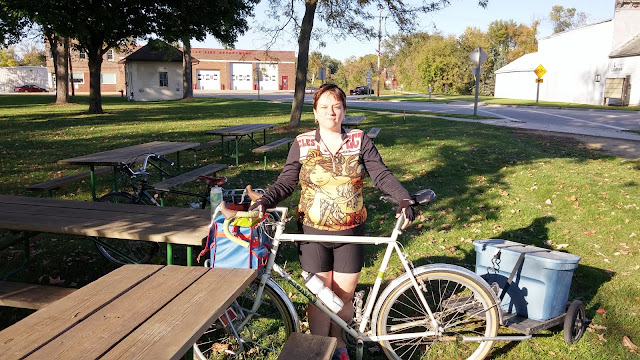 After a quick snack stop in Belleville, we continued on to the always amazing Stewart Tunnel. Time to leave the trail and ride the final stretch to the park. This involves a rather mean climb, where passed two other bike campers headed for the park.


When we arrived at the park, we were amazed how busy it was. Almost all the walk-in camp sites were already occupied! A chatty ranger informed me that not only was there a harvest festival and a renaissance fair in New Glarus, but that night there would also be a bonfire and candlelight hike in the park. While we didn't care much for the park and camp sites, the proximity to New Glarus is a nice feature. We rolled down the trail into a bustling little town and enjoyed dinner at Toffler's Pub. 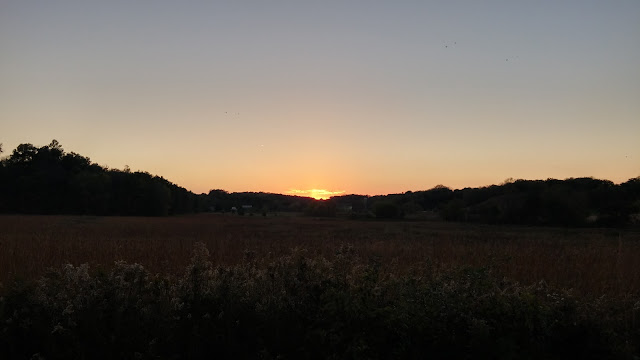 The next morning we once again followed the trail spur into town, getting in coffeeneuring ride 2 at Fat Cat Coffee Works. This is a great little coffee shop right on the bike trail, offering decent coffee and excellent pastries and breakfast foods. It's quite popular with the cycling crowd, and indeed while were there a large group of roadies made an appearance, including someone in a RUSA wool jersey. 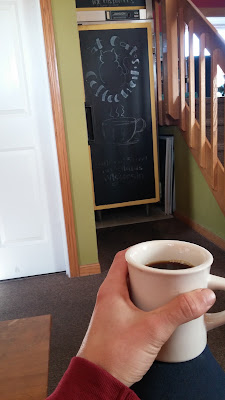 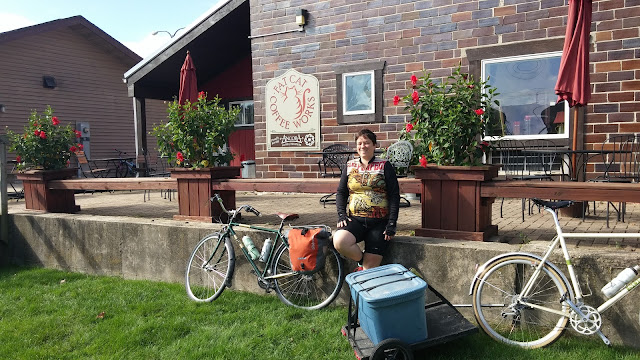 We had a bit of a headwind on the way back, but we made the S24O mark with time to spare, arriving back home around 1pm.

Written by Hobbes vs Boyle at 3:07 PM